Essential Combat Sport For The Betterment Of Your Health

Muay Thai is known as the battle sport of Thailand. In this various stand-up striking as well as clinching technique is used. It is also known as the Art of Eight limbs as the characterization of this sport is actually the function of fists, elbows, knees, and shins. A perfect Muay Thai technique is about the accurate spot to take off your attack. The most essential part of Muay Thai is proper footwork and solid defense. These factors can make you a great Muay Thai fighter. Apart from that, you have to master your firing shots and practice those blocking attacks in real time.To become a great Fighter, you have to invest your time for thorough practice and learning tricks to punch, and kick as well. Apart from your hard work and dedication a good training partner also highly essential. By this, you can have a battle with each other and work on each other’s weaknesses. And that will make you an Effective Muay Thai fighter in a less time. 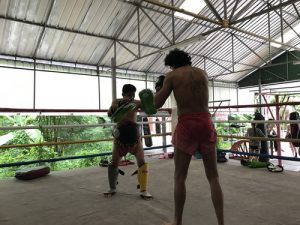 Commencement Of Muay Thai & Recent Scenario
Muay Thai is actually an ancient form of fighting. But become a popular sport with the passing of time due to its significance. It is quite dangerous, but known as the national sport as well as the cultural martial art of Thailand. The evolution of this form had materialized some hundred years ago with a motto to use the complete body as a weapon during a battle. But it has progressed significantly and become a noticeable sport by achieving acceptance, international recognition and limelight.
Final Words
As of now, Muay Thai is quite widespread on a global scale. It has also got the acceptance by the Olympic committee and accepted as an Olympic sport. Muay Thai is essential if you want to become a complete multidimensional combatant. It is quite beneficial for your health also. Now there are a lot of training camps have opened all around the world to enhance the popularity of Muay Thai.