Know why games and exercise are liked by Asia people

What makes Muay Thai so popular that the best fighters take training for this discipline? Let’s look at several of these factors:
Large amount of impact tools
The name of the “Science of the eight limbs” refers to how the Muay Thai instructs the practitioners to use both legs and arms and also the elbows and knees to perform attacks. It is very good for health. Also to get a greater effect in Muay Thai is the “clinch”, where you control your opponent’s position or hit him while holding his body with your arms. 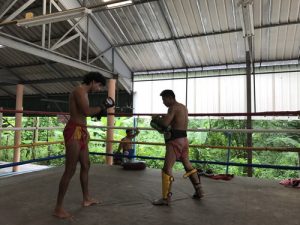 Effective standing fight
Muay Thai is very effective in the standing fight and exercise. You can use several techniques in this sport until the fight ends in the ground. From powerful and devastating blows, to immobilizing kicks, Muay Thai can take your opponent to the ground.
Easy to learn
The Muay Thai camp is known for its simplicity and effectiveness, making it an ideal part of training for a Muay Thai fighter, especially because they have to play with various disciplines.
It is one of the fundamentals of training
We have mentioned that the best fighters in the world have Muay Thai as part of their background. Thanks to its versatility, it is part of the mixed martial arts training that any fighter should have.
Effective personal defense style
Few martial arts are effective in self-defense in the real world. Muay Thai belongs to these few disciplines, teaching not only to strike at weak points, but also locks, submissions and using size and power against opponents. As the training have less rules and more unpredictability than other styles. Knowing how to adapt to a “real” fight is a valuable skill, and Muay Thai teaches that well. Also this game helps to give good shape to the body